Our Epigenetics series continues! So far in Part 1 and Part 2, we’ve introduced the field of epigenetics and the bisulfite-based approaches to studying DNA and RNA methylation. In Part 3, we look at non-bisulfite methods to study nucleic acid methylation. 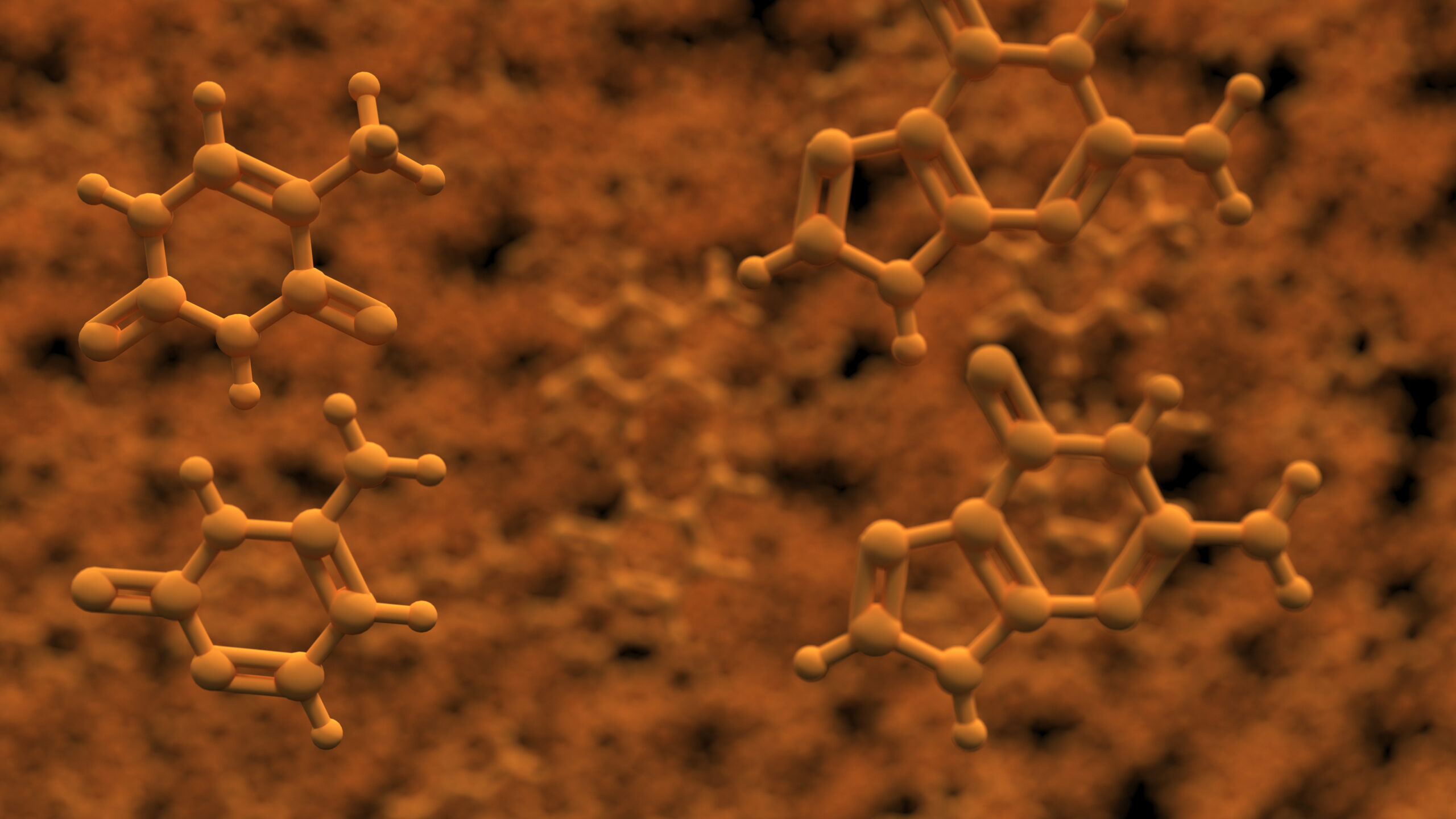 Locus-specific approaches can reveal whether or not individual cytosine bases are methylated or not, while global approaches can be used to find out whether certain treatments or knockout/knockdown of regulatory genes impact overall methylation levels. Genome-wide approaches provide single base resolution throughout the genome. The schematic below gives a brief overview of the methods that may be used alone or in combination to analyse DNA or RNA methylation. 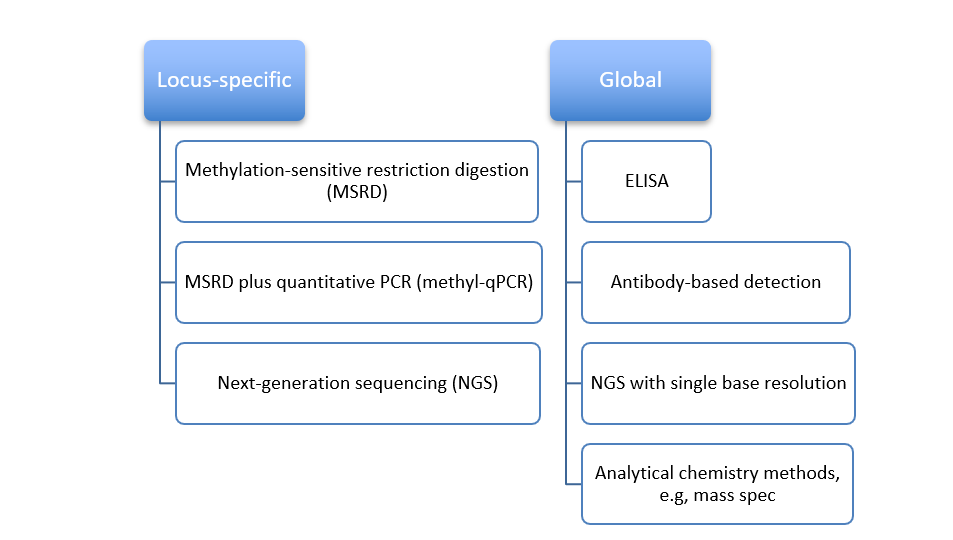 This approach exploits the activity of methylation-sensitive restriction enzymes (MSREs). The principle is that restriction digestion of methylated and non-methylated DNA yields distinct banding patterns because methylated bases cannot be cleaved by MSREs.
Bear in mind that conventional MSREs do not distinguish between 5-mC and 5-hmC.
Furthermore, MSRD followed by agarose gel electrophoresis may provide qualitative information by allowing comparisons of DNA isolated from samples following different treatments, but it cannot provide locus-specific resolution.

Locus-specific information can be obtained by combining MSRD with quantitative real-time PCR. In this setup, the DNA to be tested, e.g., genomic data from a set of treated samples, is split into two aliquots, one serves as a test and the other one as a reference or control.

The test sample is digested with an MSRE while the reference is mock-digested. The DNA from both aliquots is then amplified using real-time PCR in the presence of a DNA-binding fluorescent reporter dye.

Cycle threshold (Ct) values for test and reference samples will vary depending on methylation status. Since methylated DNA is resistant to MSRE, it will be amplified robustly while non-methylated DNA will yield less PCR product. A comparison of methylated and non-methylated DNA following digestion with a MSRE will typically reveal large Ct differences (Figure 1). 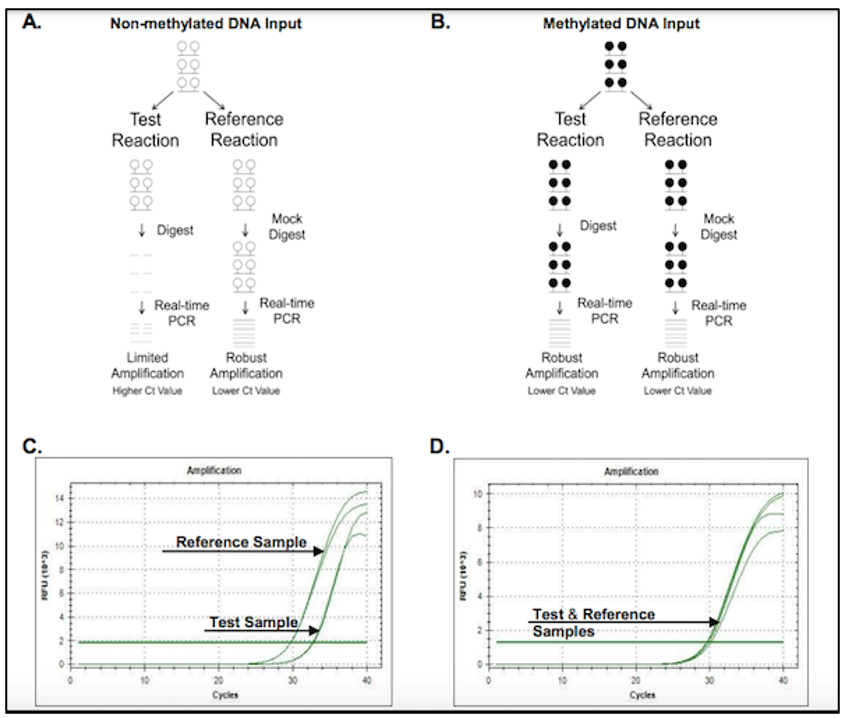 If desired, a 5-hmC-specific glucosyltransferase enzyme can be used prior to digestion to specifically tag 5-hmC sites. This will yield the modified base, glucosyl-5-hydroxymethylcytosine (g-5-hmC). Instead of a MSRE, a g-5-hmC sensitive restriction endonuclease (GSRE) is then used to digest the sample. GSREs are sensitive to g-5-hmCs, allowing specific detection of tagged 5-hmC in downstream qPCR.

These workflows require high-quality DNA and should include known methylated and non-methylated standards that match the species in question to validate accuracy and results.

Commercial kits exist for MSRD-qPCR and these usually include a pair or panels of locus-specific primers. One can modify these assays to study other regions, e.g., promoters, of interest by designing and optimising target-specific primers.

A number of commercial kits exist to detect and quantify global levels of 5-mC, 5-hmC and 5-formylcytosine (5fC) in DNA samples, or N6-methyladenosine (m6A) and 5-mC in RNA samples, in comparison to included standards.

Similar kits also exist to detect and quantify the activity of DNA- and RNA-modifying enzymes such as methyltransferases and demethylases, which catalyse the addition and removal of methyl groups to nucleic acids, respectively.

The ELISA-like approach can be scaled up to rapidly screen compound libraries or perform genetic screens to interrogate epigenetic mechanisms.

Antibodies that recognise methylated bases are used in combination with immunoassay formats such as ELISAs, dotblots and immunoprecipitation. They are also used to enrich for methylated DNA from a fragmented DNA sample for downstream analysis by next-generation sequencing or mass spectrometry to yield data on the methylation status in DNA samples with single base resolution.

A range of commercially available methylation-specific antibodies exists for detection of 5-mC,5-hmC or m6A.

Next-generation sequencing (NGS) can provide genome-wide information about methylation with single base resolution. The Reduced Representation Hydroxymethylation Profiling (RRHP) method is used to analyse 5-hmC at single bases from low input samples without the need for bisulfite conversion.

Zymo Research has developed a comprehensive library preparation kit for RRHP with a straightforward workflow as follows:

To use these methods, the DNA to be analysed is first digested with an enzyme that can cleave DNA into individual nucleotides or nucleosides, allowing single base resolution when combined with a suitable downstream method. With the exception of TLC, the downstream approaches require specialised equipment and expertise and are therefore not standard in many epigenetic research labs.

Stay tuned for our next and last post in this series, where we will revisit the role of histones in chromatin packaging and gene regulation and look at how one can study epigenetic modifications to histones. In the meantime, if you would like to discuss any aspect of epigenetic analysis or find the right approach for your research question, please reach out to your local representative by writing to info@nordicbiosite.com.