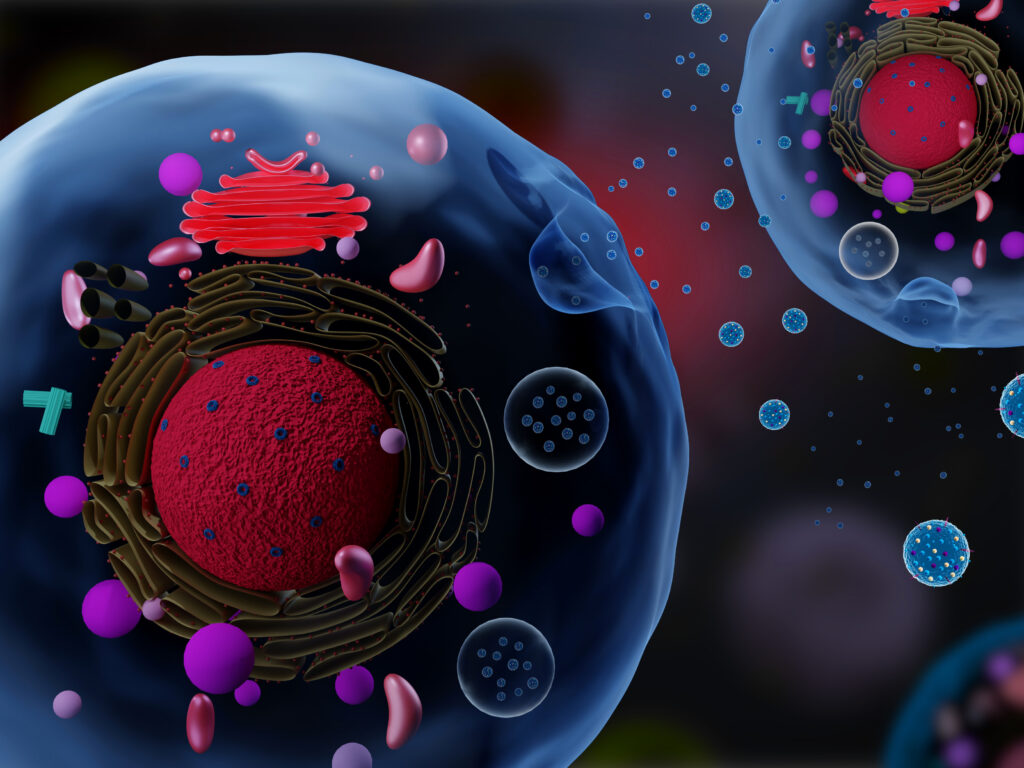 Exosomes constitute a subtype of extracellular vesicles (EVs) that are released from the cytoplasm of most mammalian cell types. Structurally, they exist as enclosed particles surrounded by a lipid bilayer and appear as round bubbles when viewed under an electron microscope.

First discovered in 1983 by researchers studying transferrin receptors, exosomes are now increasingly recognised as key players in intercellular signalling and are demonstrated to play crucial roles in regulating tumour growth, metastasis, and angiogenesis during cancer development (1, 2).

Exosomes are tiny, with a diameter range of 30 – 200 nm. To put this into perspective, a single exosome in the upper size range is about 5 times smaller in diameter than an average E. coli cell!

Exosomes are found in cells and bodily fluids including urine and blood, and they form by budding inward within endosomes inside cells, which results in the formation of multivesicular endosomes that each contain many exosomes. It’s important to note that although exosomes are often simply referred to as EVs, they are actually one of two subtypes of EVs, where the other subtype, the microvesicles, are larger in size and are generated from outward budding of the plasma membrane.

The biological roles of exosomes are mediated via their varied cargo that may include: mRNA transcripts, a variety of non-coding RNAs including microRNAs, proteins or lipids. Their surrounding lipid bilayer protects the cargo inside, and as an exosome leaves a cell through fusion with the plasma membrane, it transports its cargo molecules between that cell and its surroundings, effectively acting as an communicator, bringing ‘messages’ between cells and tissues.

Although they were first discovered almost 40 years ago, exosomes flew under the radar of the scientific community for a long time, and were often viewed as meaningless cell debris. This changed about 20 years ago when researchers began to speculate roles for exosomes in intercellular communication, given their repeated discovery in diverse cell types and bodily fluids, with a lipid bilayer that looked so similar to that of their parent cells.

Key exosome research discoveries since then have revealed that exosomes are released in a specific manner from cells in response to certain external stimuli, exosomes secreted by one cell can be delivered to another cell, causing the recipient cell to change its behaviour, and that nucleic acid cargos in exosomes can impact the expression of proteins in recipient cells.

Exosomes in Research and Medical Applications

Although our understanding of exosomes has greatly improved during the past two decades, key questions about their biogenesis and cargo, how they are released from cells in response to stimuli, and how they target specific cells remains unanswered. As researchers continue to address these questions, these microscopic entities have also caught the eye of clinical and diagnostics researchers.

Efforts to decipher the exact role of exosomes in diseases are motivated by the potential to develop new diagnostic assays using exosomes as specific disease biomarkers  – given their abundance and ease of access in bodily fluids – e.g., as prognostic markers and/or for disease grading in cancer patients.

Strategies to develop exosome-based therapeutics, e.g., by exploiting the transportation capacity of exosomes to deliver nucleic acids or other small molecule drugs to a specific cell or tissue types, are also ongoing.

Are You Working With Exosomes?

Exosome research is an exciting field and if you are already working with or planning to start working with exosomes, we would love to hear from you!

We have a broad portfolio of kits for pure and intact exosome isolation and enrichment from all kinds of cell cultures and bodily fluids. These kits neither require ultracentrifugation nor filtration and the purified exosomes are ready for electron microscopy and nanoparticle tracking analysis. For those interested in studying exosome cargo, we have kits for RNA isolation, which are suitable for exosomes as well as larger extracellular vesicles, with the possibility to fractionate cell-free-circulating RNA.

If you are interested in hearing more about what we can offer for exosome research, then don’t hesitate to reach out to us by email to info@nordicbiosite.com and your local representative will be in touch with you.