The Lowdown on Real-Time PCR – Part 1

In case the name doesn’t give it away, real-time PCR is a PCR application that monitors DNA amplification in real time. This means that amplification is monitored during the PCR reaction, and not at the end of the reaction as with end-point PCR, where PCR products are typically analyzed post-run on agarose gels.

This article is the first in a two-part series. In part 1, we will go through the basics of real-time PCR, including its advantages over end-point PCR, the workflow, the typical data output, the choice of fluorescent labeling systems available and the pros and cons of each, while part 2 will cover the different quantification methods available, setup tips, primer design and quality control.

For standard guidelines on real-time PCR nomenclature and how to report results, check out the Minimum Information for Publication of Quantitative Real-Time PCR Experiments (MIQE) (1).

The real-time PCR workflow is quite straightforward, and the PCR reaction setup is similar to end-point PCR.

During sample preparation, the sample (i.e., your template) is prepared by isolation of high-quality DNA or RNA. For gene expression analyses, RNA is subjected to reverse-transcription, providing cDNA as the template for the real-time PCR reaction.

Where Does the ‘Real-Time’ Part Come into It?

Most modern real-time PCR instruments include analysis software that can graph the cycle number vs. fluorescence intensity to provide quantitative information about the amplified DNA. Otherwise, the raw data can be extracted from the instrument and analyzed manually. 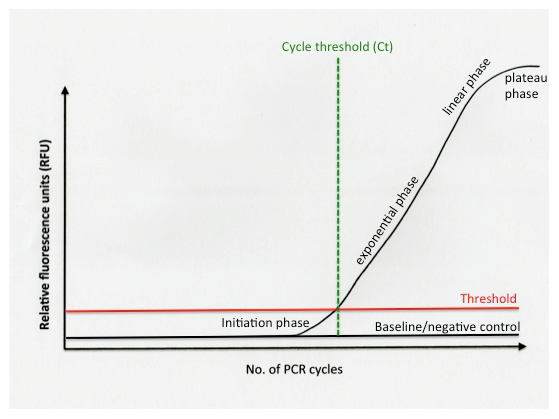 * PCR efficiency will be covered in more detail in part 2 of this series.

During the linear phase, amplification slows down as reaction components become limited. The cycle number at which a PCR reaction enters the linear phase may differ from one sample to the next, depending on many factors e.g., the amount of template DNA present to begin with. The reaction eventually reaches the plateau phase where the fluorescence signal remains constant.

During the linear phase of any PCR run (end-point or real-time), the number of amplicons won’t necessarily increase at the same rate in every reaction, and some reactions are likely to reach the linear phase before others in the same run. Differences between amplification rates are even more pronounced during the plateau phase because many of the PCR components may be depleted, and some PCR reactions may have come to a complete halt. Importantly, initial differences in target abundance between different samples will not be reflected in the linear or plateau phases.

Since quantification occurs during the exponential phase in real-time PCR, we get a true picture of the amount of amplicon present before the differences mentioned above come into affect. However, in end-point PCR, amplicons are usually analyzed on an agarose gel at the end of the run, which may be during the plateau phase. Figure 2 illustrates that while the many samples shown in these amplification curves probably have similar Cps, one would get a completely different picture if these samples were analyzed on an agarose gel! 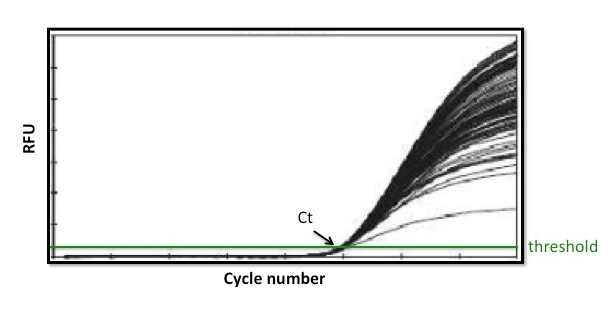 Besides those alluded to already, real-time PCR boasts a range of advantages over end-point PCR. The most significant of these are outlined in Table 1 below.

How Do the Fluorescent Labeling Systems Work?

As mentioned previously, there are two main two choices of fluorescent reporter for real-time PCR – the DNA-binding dyes and the sequence-specific fluorescence quencher probes. Which one is right for your application will depend on many factors, and before we go further, let’s have a look at how these two systems work:

For both detection systems, the amount of fluorescence emitted is proportional to the amount of amplicon present in the reaction.

So Which Fluorescence Detection Molecule Should I Use?

Research groups that analyze large numbers of genes, where the focus shifts regularly, often opt for DNA-binding dyes for convenience and cost-effectiveness. Those that work with the same handful of genes for longer periods of time may find that the time and effort invested in probe design and validation is well worth the rewards of increased specificity in the long run. Table 2 below gives an overview of the pros and cons of each detection system.

That was it for part 1. Stay tuned for part 2 where we will complete this series by looking at the various real-time quantification methods available, setup tips, and quality control steps that will help you to achieve high-quality real-time PCR results every time.