How Do Antibiotics Work?

As one of the most highly exploited medication classes, antibiotics address a broad range of bacterial infections by either killing (bactericidal), lysing (bacteriolytic), or stalling the growth of (bacteriostatic) microbes. Families of antibiotics can be distinguished by chemical structure and by the mechanism of action that specifically targets the type of bacteria being treated. They may attack a specific feature of bacteria such as the cell wall or plasma membrane, the reproductive process of bacteria, critical chemical pathways in bacteria (e.g., synthesis of proteins, essential metabolites, or energy), or the mechanisms bacteria use to resist offense. Most importantly, to be safe as well as effective against microbes, these compounds must target mechanisms specific to prokaryotic cells without affecting eukaryotic function. Though certain antibiotics that do affect eukaryotic cells have been exploited in cell culture systems and other research applications to better understand mammalian cell biology or to control certain cellular functions.

The six major targets of antibiotics include:

β-Lactam antibiotics, including penicillins, cephalosporins, monobactams, and carbapenems, are distinguished by a lactam ring in their molecular structure and act by inhibiting the synthesis of the peptidoglycan layer of bacterial cell walls. They interfere with the transpeptidase, transglycosylase, and/or carboxypeptidase activities of species-specific membrane-bound penicillin-binding proteins (PBPs) that facilitate cross-linking of the cell wall components during the final stage of bacterial cell wall synthesis (Figure 1). This occurs by binding to the terminal D-Ala-D-Ala in the lengthening peptidoglycan structure and rapidly acylating the active site serine of the PBP, followed by very slow deacylation, which inactivates the PBP. As the cell grows, it is not able to synthesize more cell wall to accommodate the expansion. As a result, the pressure inside the cell will push the plasma membrane out of a weak spot in the cell wall like a balloon, which will eventually rupture. Because the formation of a division furrow to create new daughter cells depends on the ability to synthesize a new cell wall, the cell is unable to pinch off the extra cytoplasmic material. An extremely vulnerable spheroplast is formed when the cell wall sheds entirely. In this form, bacteria lose control over their shape, and the duplication of much of their genetic and metabolic material further disrupts homeostasis, which leads to cell death. Bacteria develop resistance to β-lactam antibiotics by synthesizing β-lactamase, an enzyme that attacks the β-lactam ring to inactivate the antibiotic. More than 1,000 unique β-lactamases have been described. To overcome this resistance, β-lactam antibiotics are usually given with β-lactamase inhibitors. Efflux and modification or deletion of porin function can also play a role in resistance to some β-lactams in conjunction with β-lactamase production, which results in resistance to virtually all β-lactams. Some bacteria area also able to acquire new PBPs that have low affinity for β-lactams. The best-known example of this strategy for resistance occurs with methicillin-resistant S. aureus (MRSA) that evolved a PBP with low affinity for all but a few recently developed β-lactams.

Glycopeptides and lipoglycopeptides are composed of glycosylated cyclic or polycyclic nonribosomal peptides that interfere with cell wall formation by forming a complex between the antibiotic and the C-terminal D-Ala-D-Ala dipeptide of the nascent peptidoglycan on the outer surface of the cell membrane of Gram-positive bacteria (Figure 1). The formation of this complex prevents the transglycosylation and transpeptidation reactions that are necessary for completion of the peptidoglycan chain, resulting in an incomplete cell wall and subsequent cell death. They are too bulky to pass through the porin channels found in the outer membrane of Gram-negative bacteria. In addition to its interaction with D-Ala-D-Ala, some antibiotics in this group bind to lipid II, a cell wall precursor on the cytoplasmic side of the cell membrane that must translocate across the cell membrane to deliver and incorporate its disaccharide-pentapeptide monomer for cross-linking into peptidoglycan. This interaction results in membrane depolarization and eventual membrane disruption that leads to cell death. Since glycopeptides target the outer surface of the cell wall, they do not have to overcome a membrane barrier and do not interact with enzymes. Known glycopeptide resistance mechanisms instead are associated with structural modifications in the substrates for the enzymes that incorporate the final amino acids in the pentapeptide precursors. The most relevant modifications involve replacement of the C-terminal D-Ala with D-lactate or D-serine, resulting in D-Ala-D-Lac or D-Ala-D-Ser peptide sequences with reduced binding affinities for the antibiotic.

The phosphonic acid fosfomycin inhibits the growth of a wide variety of bacteria by targeting the enolpyruvyl transferase MurA, which catalyzes the first committed step of peptidoglycan synthesis that is essential for cell wall formation (Figure 1). It enters cells through glycerol-3-phosphate and hexose-6-phosphate transporters. Deficiency in these transporters that cause increased efflux or decreased cellular uptake can lead to resistance. Specific murA gene mutations that produce an enzyme with reduced affinity for fosfomycin or increased expression of MurA that overwhelms the capacity of fosfomycin for growth inhibition are also known causes of resistance. Fosfomycin-inactivating enzymes have also been documented.

Disrupting the plasma membrane causes rapid depolarization, resulting in a loss of membrane potential leading to inhibition of protein, DNA, and RNA synthesis, which leads to bacterial cell death. There are several types of antibiotics that function by disrupting or injuring the plasma membrane. One example is daptomycin, a cyclic lipopeptide that binds to bacterial plasma membranes, entering the phospholipid bilayers and causing a loss of membrane potential and redirecting proteins essential for cell division and cell wall synthesis (Figure 2). Before these effects were discovered, daptomycin was first shown to interfere with peptidoglycan synthesis. Resistance to daptomycin is rare but has been associated with point mutations in mprF, whose gene product controls the addition of a lysine to membrane phosphatidylglycerol to produce lysylphosphatidylglycerol. Indeed, the composition of the cell membrane influences the antimicrobial activity of cationic antimicrobial peptides. Alterations of the histidine kinase YycG, which is thought to be involved in cell permeability, have also been implicated in daptomycin resistance.

Antibiotics that target RNA transcription or DNA replication to prevent new bacteria from being produced must be able to easily diffuse through bacterial membranes. Rifamycins, a subclass of ansamycins, can easily cross the bacterial cell wall and membrane and bind to bacterial DNA-dependent RNA polymerase, thereby suppressing the initiation of RNA transcription. Rifamycins inhibit RNA synthesis by directly blocking the path of the elongating RNA when the transcript becomes two to three nucleotides long (Figure 3). They do not interact with mammalian RNA polymerases but have broad-spectrum bactericidal effects on Gram-positive bacteria and some Gram-negative bacteria. Resistance to rifamycins mainly develops from mutations in the bacterial RNA polymerase.

Anthracyclines, which inhibit DNA replication and transcription in both bacterial and mammalian systems, are most often used as anticancer agents. They interact with the DNA-topoisomerase II complex or DNA itself through intercalation or forming covalent bonds and base modifications that require DNA repair or lead to apoptotic cell death (Figure 3). They attack rapidly growing malignant cells as well as normal cells, but because malignant cells are growing at a faster rate than the surrounding normal tissue, a higher percentage of cancer cells are harmed.

Protein synthesis inhibitors act at the ribosome level, working at different stages of prokaryotic mRNA translation into proteins (Figure 4). They are highly selective to 70S ribosomes in prokaryotic cells since eukaryotic cells have a different ribosomal size, sequence, structure, and ratio of protein to RNA. Translation in prokaryotes involves the assembly of a small subunit (30S) and a large subunit (50S) to form a ribosome that binds mRNA to read the nucleotide sequence. tRNA binds to the A, P, and E sites during the initiation, elongation, and termination stages to translate the polypeptide sequence. By targeting different stages of mRNA translation, antibiotics can be swapped if resistance develops. 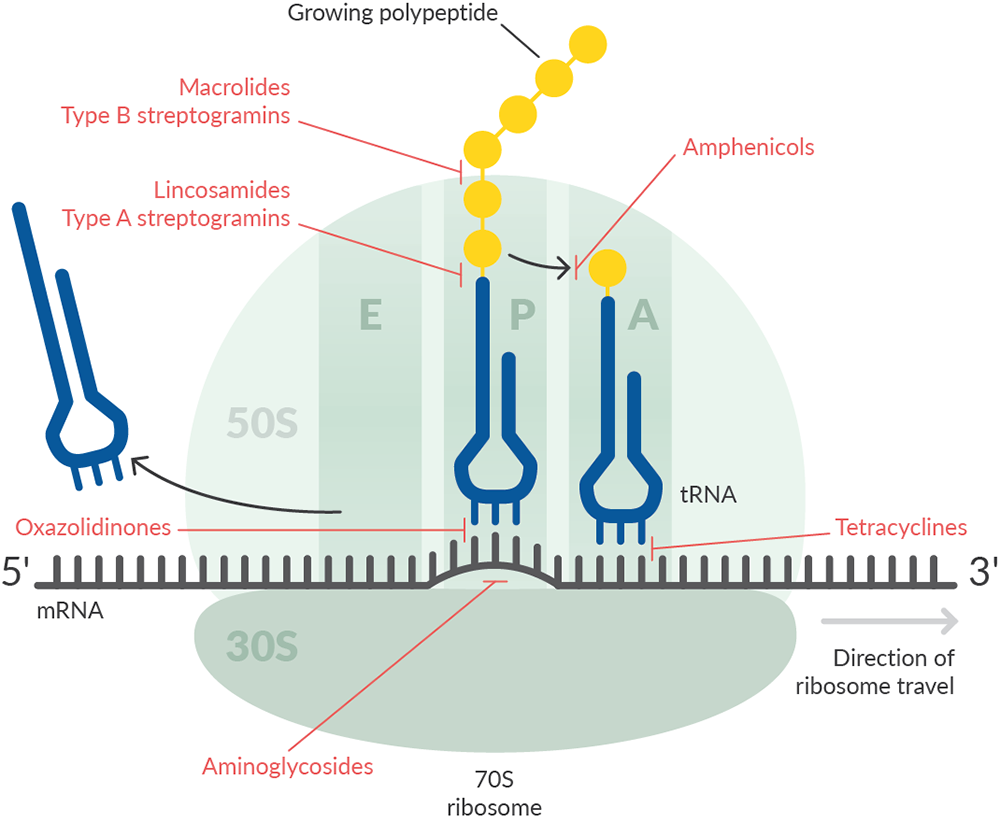 Tetracyclines bind reversibly to the 30S ribosomal subunit at a position that blocks the binding of the tRNA to the acceptor site on the mRNA-ribosome complex. Resistance to tetracyclines develops primarily by preventing accumulation of the drug inside the cell either by decreasing influx or increasing efflux.

Aminoglycosides and aminonucleosides such as puromycin bind to the active site of 16S rRNA within the 30S ribosomal subunit, interfering with the accurate recognition of tRNA by rRNA during translation. The initial steps required for peptide synthesis, such as binding of mRNA and the association of the 50S ribosomal subunit, are uninterrupted, but elongation fails to occur due to disruption of the mechanisms for ensuring translational accuracy, causing premature termination of nascent polypeptide chains. In the case of puromycin, these properties have been exploited in assays for peptide-bond formation and elongation and also as a selection agent in cell culture systems. Resistance to aminoglycosides develops from structural modifications to the antibiotic made by aminoglycoside phosphotransferases, aminoglycoside nucleotidyltransferases, and aminoglycoside acetyltransferases expressed in resistant organisms.

Amphenicols block the peptidyl transfer step of elongation on the 50S subunit in bacteria, most likely acting at the A site. They can also perturb additional ribosomal functions, such as termination, translational accuracy, and synthesis of 50S ribosomal subunits. Chloramphenicol can also bind the mitochondrial 70S ribosome, inhibiting mitochondrial protein synthesis and thus producing toxicity in eukaryotes. Mutations or alterations to the target of amphenicols are a common mechanism of resistance.

Lincosamides act as structural analogs of portions of tRNA during the initial phase of pretranslocation in the peptide elongation phase, interrupting the process of peptide chain initiation in the 50S subunit. They can also cause peptidyl-tRNA to dissociate from ribosomes. Resistance to lincosamides may be caused by methylation of the 23S rRNA, modification of the antibiotics by specific enzymes, or active efflux systems.

Most macrolides interact with 23S rRNA within the 50S ribosomal subunit, blocking the approach to the elongating peptide’s exit tunnel, which results in a premature release of peptidyl-tRNA intermediates. They compete with lincosamide antibiotics that are direct peptidyl transferase inhibitors. The three main mechanisms responsible for acquired macrolide resistance include ribosomal target modification, an active drug efflux mechanism, and mutation in the 23S rRNA.

Streptogramins act in a similar way to lincosamides and macrolides depending on type. Type A streptogramins block substrate attachment to the donor and acceptor sites of the peptidyl transferase center on the 50S subunit, preventing the earliest event of elongation. Type B streptogramins compete with macrolides for binding the 50S ribosome to interfere with the formation of long polypeptides and cause a premature detachment of incomplete peptide chains. Type A streptogramins can increase the ribosome affinity for type B streptogramins, causing a bactericidal synergy between the two normally bacteriostatic agents. Resistance to these antibiotics mainly involves inactivation of inhibitors and mutations of ribosomal proteins or rRNA genes.

Nitrofurans have a unique mechanism for slowing bacterial growth. They are prodrugs that require reductive activation by two redundant bacterial flavoproteins to reactive intermediates. These reactive intermediates have diverse effects, triggering DNA lesions, inducing oxidative stress, and inhibiting RNA and protein synthesis. It is not known if the reactive intermediates directly modify DNA, RNA, and proteins or if they primarily target the cellular machineries that carry out replication, transcription, translation, and energy metabolism. Though rare, mutations in genes encoding the prodrug-activating enzymes can lead to resistance.

Bacteria need folic acid to synthesize the nucleic acids that make up their DNA. Sulfonamides inhibit folate synthesis by targeting dihydropteroate synthase (DHPS) in the folic acid pathway. As structural analogs to 4-aminobenzoic acid (PABA), they competitively inhibit the incorporation of PABA into folic acid (Figure 5). Since eukaryotic cells are not dependent on endogenous synthesis of folic acid and generally lack DHPS, these cells are not targeted. Resistant mutants encode variants of DHPS that are insensitive to sulfonamides. To overcome this, sulfonamides are now commonly used in combination with trimethoprim, an inhibitor of dihydrofolate reductase (DHFR) that reduces dihydrofolic acid to tetrahydrofolic acid, to decrease folic acid synthesis.

Figure 5. Antibiotics that are structural analogs of PABA interfere with folic acid synthesis and work synergistically with DHFR inhibitors.