SOD1 (Cu/Zn superoxide dismutase) is a ubiquitously expressed protein which generally forms homo-dimer. Pimary function is thought to be as a cytosolic and mitochondrial antioxidant enzyme, converting superoxide to molecular oxygen and hydrogen peroxide. According to many research results,SOD1 is one of the major causative genes of Amyotrophic Lateral Sclerosis (ALS), which is a fatal adult-onset neurodegenerative disease. Although ~90% of ALS cases are caused sporadically, around 10% of ALS cases are familial. Of the familial ALS, ~20% are caused by genetic mutation of SOD1. More than 100 mutations in SOD1 have been reported so far, but pathophysiological functions of mutant SOD1 are not clear yet. Recent progresses show that SOD1 mutant proteins causes ALS through a gain of toxic function. Prof. Ichijo and co-workers developed the novel rat monoclonal anti-SOD1 antibodies, clone MS785 and MS27, which specifically bind to conformationally altered SOD1, not detecting wild type SOD1 homo-dimer (Fig.1). Although both clones are succeeded in specifically detecting over 100 SOD1 mutants (Ref.2), these antibodies failed to detect some specific mutants which have mutation located on each epitope region. Our Anti-SOD1 (ALS-related mutants) Cocktail is a mixture of MS785 and MS27 and overcomesabove problem. This will help to find pathophysiological role of SOD1 mutants in ALS patients. ALS is also considered as an ER-stress disease. Zinc-deficiency is one of the causes of ER-stress and depletion of zinc from SOD1 induces conformational change dramatically. Under the zinc-deficient condition, endogenous wild-type SOD1 has aconformation similar to ALS-related mutants. Actually both MS785 and MS27 could recognize wild-type SOD1 under the zinc-deficiency specifically. These antibodies are also powerful tools to investigate zinc-related ER-stress research as well. This product has been commercialized under the license of the University of Tokyo. 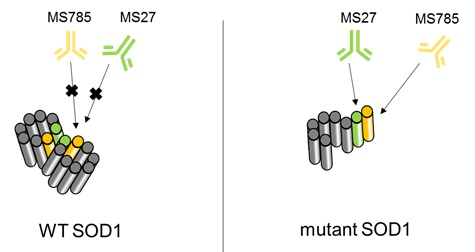 Note : In denatured condition, MS785 and MS27 detect both wild and mutant type of SOD1

Flag-tagged SOD1 wild type (WT)or G93A mutant-expressing HEK293 cells were fixed with 4% paraformaldehyde/PBS for 10 min at R.T. Subsequently, cells were incubated with PBS containing 0.2% Triton X-100 for 5 min and washed three times with PBS. After blocking with PBS containing 5% BSA, cells were incubated with primary antibodies (1 ug/ml MS785, MS27 or cocktail) for 12 hours at 4℃, with secondary antibody for 2 hours at R. T. sequentially. Cells were washed and stained with DAPI. Although anti-FLAG antibody clearly visualized either WT and G93A mutant, MS785, MS27 and MS785/MS27 cocktail only detected G93A mutant.

Fig.3 Detection of endogenous SOD1 wild type under ER-stress HEK293 cells were cultured in the presence and absence of 10 uM TPEN, a potent zinc-specific chelator, for 8 hours. After treatment, cells were lysed and immunoprecipitated with 1-5 ug of MS785, MS27 or cocktail. Subsequently, SOD1-antibody complexes were captured by Protein G-beads. Under the zinc-deficient ER-stress, these antibodies could recognize endogenous SOD1 wild type with mutant like conformation.